Youssef Chahine is the most important director in Egyptian film history. Egyptians know what they are in for when they choose to watch one of Chahines’ movies, for his pictures never fail to shock. Any Chahine directed film is controversial and ahead of its time. Now regarded as a genius and the father of Egyptian cinema, Chahine started making movies in the late 40’s. He continued shocking Egyptians in the 50’s, 60’s, 70’s, 80’s 90’s and 00’s. However, he could never measure up to his crowning achievement and defining masterpiece, ‘Cairo Station’.

The movie takes place on a train station in the course of a single day. The camera introduces us to the three main characters: Qinawi (Youssef Chahine) is the poor, perverted newspaper vendor, Hanuma (Hind Rostom), the beautiful woman constantly chased by security for selling soft drinks illegally, and Abu Serib (Faris Shawqi), Hanuma’s soon to be husband who desperately tries to form a union.  Qinawi spends his days fantasizing about women. Pin up models make up the walls of his dirty little shed as he spends his time staring at the pictures with his piercing black eyes. While at work, he does not attempt to sell any newspaper. Instead, he continues his habit, desperately trying to catch any glimpse of cleavage. Like a predator, women and sex is all that interests him. He is a sick and disturbed individual who rarely utters a word. Everybody knows Qinawi but no one knows of his sickness, no one but the audience. 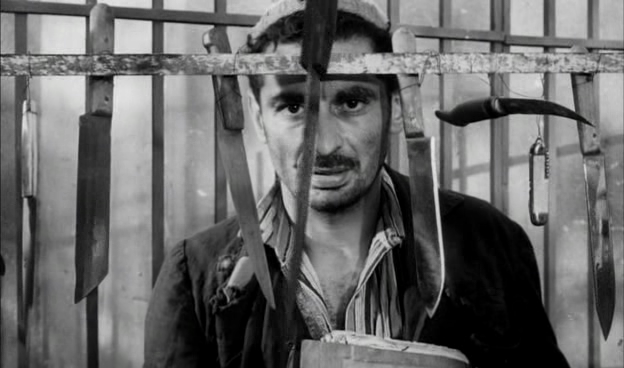 Hanuma being a tease draws his attention and so Qinawi starts obsessing about her.  It does not take him long to propose to the already engaged Hanuma. Abu Serib is doing well financially. All Qinawi has to offer is a gold necklace that once belonged to his mother.  Naturally, Hanuma turn him down. She does not take Qinawi seriously often teasing and making fun of the troubled man. However, Qinawi does not give up. Like a predator stalking his wounded prey, his eyes stay fixed on her. He follows her around studying her curves and peeking into her privacy.

At one point in the film, Qinawi takes a marker and draws a bucket full of soft drinks onto the arm of one his pin up models to make it look like Hanuma. He then covers the window with some clothing, sits in a dark corner and the screen fades to black. We know what happens next.

The main character is a pervert. He is both unlikable and disturbing. The subject is one we would rather not study, but we have no choice. Soon the plot takes us to places we wish we would not bear witness to as murder, violence, and chaos follows.

Chahines’ haunting performance is as powerful as his groundbreaking directing. He is in total control behind the camera taking us into the mind of a sexually repressed man slipping into insanity. His performance ranks with the best in film history with facial expressions and body language done to a freighting perfection. Hind Rostom, the Marilyn Monroe of Egypt is impressive as the trouble making femme fatal. Every character in this movie feels real.

The dirty and torn costumes and on location filming, contribute to the gritty realism of this dark picture. Italian Neorealism influenced the great Egyptian director who dared to force the public to deal with reality. The screenplay is pitch-perfect and, Alfred Hitchcock would have snatched it in a second. Prior to ‘Cairo Station’ Egyptian films were mostly feel good pictures, simply there to entertain. They were an escape for the everyday man, so when ‘Cairo Station’ premiered, everyone was shocked. Here was this young director judging an entire culture with a film that breaks every norm of Egyptian cinema. Shock waves followed its initial release.

The censorship banned it by public demand. Critics praised the masterpiece, but the public despised it. After a screening of the film, a man walked up to Chahine, spat on his face, and said, “You have given Egypt a bleak image.”

After 20 years under a strict ban, Egyptians rediscovered it. It was screened at film festivals worldwide   and ever since the rebirth of ‘Cairo Station’ in 1978, Egyptians have recognized it as the work of a master. The reputation of the film only grew and now it is the considered the ‘Citizen Kane’ of Egyptian cinema.

The train station is clearly an embodiment of a city. “This is Cairo Station”, the narrator says in the beautifully shot opening scene, “the heart of the capital. Every minute one train departs…and every minute another one arrives. Thousands of people meet and bid farewell…people from North and South, natives and foreigners, people with and without jobs.” The film is a study of an entire city and an individual. Chahine is judging an entire system by forcing us to see that city through the eyes of a psychopath. It is extremely difficult for a director to handle a picture from both a macro and micro perspective but Chahine manages to pull it off beautifully. His film is about a country that needs a union and the sexual repression of a culture.  ‘Cairo Station’ is what you would get if you put Scorsese’s ‘Taxi Driver’ and Hitchcock’s ‘Psycho’ in a mixer.