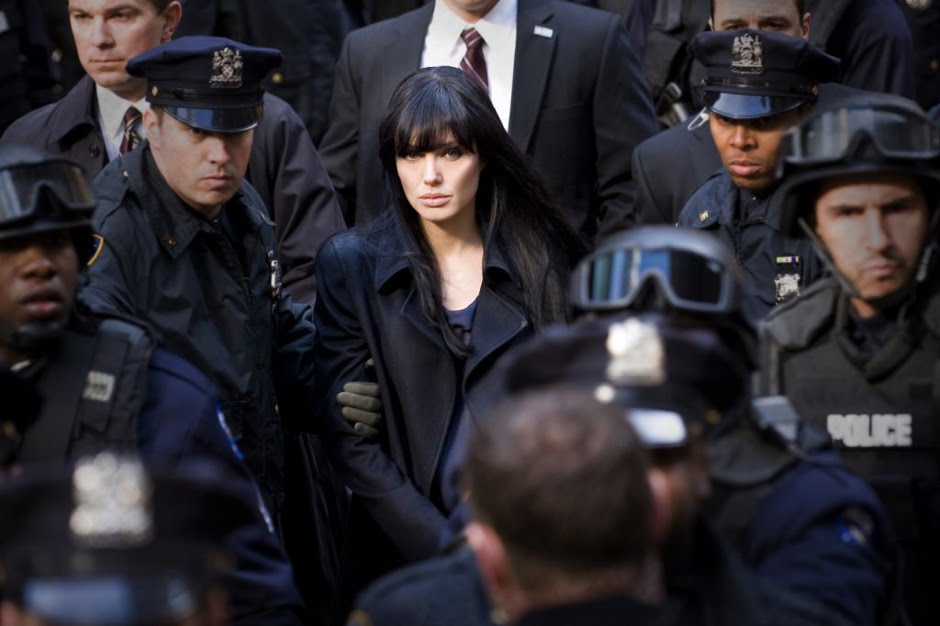 Most action films do the mistake of placing the action in the foreground, the storyline in the middle-ground and the major minor and side characters barely visible in the background. “Salt” is different in that character development comes first and everything else ties up neatly around Angelina Jolie’s Evelyn Salt, a role she was born to play.

The best of action films are always about human beings who over the course of the picture undergo change. Linda Hamilton’s Sarah Connor in “Terminator 2: Judgment Day”, Robert De Niro’s Neil McCauley in “Heat”, Jason Bourne in the Bourne trilogy and now Angelina Jolie as Evelyn Salt are not one dimensional characters labeled as either hero or villain before the opening credits start. Instead, we are treated with characters that change for the better or worse throughout the shocking and devastating events surrounding them. The stories of the previously mentioned films are all based on the emotional and physical development of well thought out characters rather than the other way around.

“Salt” revolves around a government agent who suddenly becomes the main suspect of an upcoming assassination confirmed by a captured Russian spy. Even though the story clearly pays tribute to Cold War paranoia films of the 60’s and 70’s, it is not outdated but rather fresh considering Muslims have dominated the bad boy club for far too long. Vassily Orlov (Daniel Olbrychski) also accuses the soon to be on the run agent of being a Russian spy. According to director Phillip Noyce, the Russian mole within a US-government-agency hysteria still exists and most CIA agents believe that high ranking Russians still lurk within the agency.  This fear of what is or is not there usually drives people into a paranoid state of mind and it never heals completely. This is probably what initially attracted the director to the project.

Like with Jason Bourne, we are constantly trying to figure out who the main spy is, and the character’s sure to be interesting background. However, unlike the Bourne films, Salt is not out there chasing her identity but knows exactly who she is and on which side she’s on. The audience is left clueless and in desperation. This makes “Salt” more of a cross genre in that it’s both a non-stop intense action film, and a thrilling mystery with a “North By Northwest” like fugitive touch at the center. I found myself constantly fearing the dark secrets meant to be revealed by plot twist and turns. You won’t be sitting on the edge of your seat; you’ll more likely slide off the edge and question whether you want to sit back up in fear that you won’t be able to handle the truth.

Noyce was spot-on in not exploiting Angelina Jolie’s sex symbol image. He chose to display her as a tough gritty explosive hand to hand bone-breaking combat weapon and surprisingly the result is a female spy unlike any other. Not since Ingrid Bergman as Alicia Huberman in Alfred Hitchcock’s “Notorious” has espionage looked so good and felt so human.

The most interesting relationship is not the clichéd bond between a clueless husband and wife but between Salt and her partner Ted Winter played by the very talented and underrated Liev Schreiber. To reveal more is unnecessary for your viewing pleasure but play close attention to how much of their chemistry adds to the strength of the overall experience. By the end of the gripping final scene, one thing is for sure you’ll be counting the days till director Noyce passes us more salt.