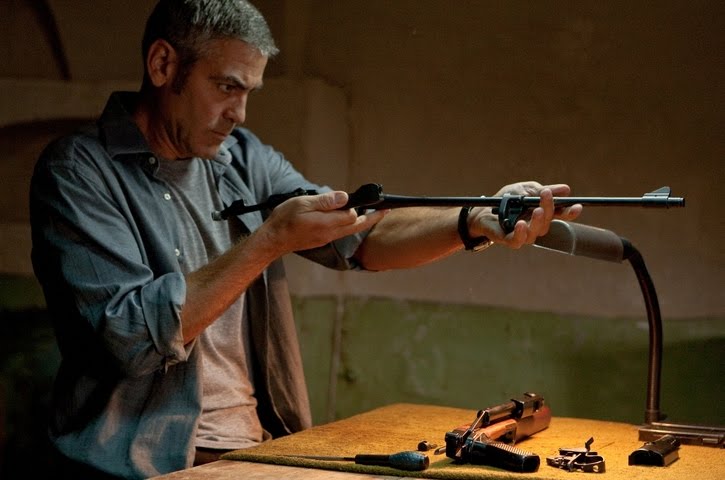 Dutch director Anton Corbijn’s “The American” is like a Shakespearean Bond film. It’s a character driven visual mood piece with minimal dialogue and layers of emotion. The previews and posters of the film will have you believe it’s another mindless ‘last job before I call it quits’ action flick. Don’t be fooled  for “The American” has more in common with European art films than the former subgenre; in fact the film has a very un-American pace. I’m sure you’re all aware of the “don’t judge a book by its cover” saying and here is proof that we can’t judge a film by its trailer.

George Clooney is Jack a craftsman who designs weapons for hitmen. He is professional, precise, and efficient at what he does. Unfortunately, old age is getting to him and he is no longer the talent he once was. In his room he does his daily Travis Bickle workouts. The viewer witnesses his loneliness through beautifully set up shots filmed in complete silence. Corbijn’s photography is so effective; blinking may result in missing the perfection of his cinematography. When Jack befriends an old priest and a prostitute, which is against the rules, the man begins to realize what the job doesn’t offer, a meaningful life. He knows he’s getting sloppy but he doesn’t stop himself. He’s helpless in that deep down inside Jack longs for a way out.

The film substitutes cheap car chases and out of this world stunts with thought provoking imagery and believable chemistry. A white butterfly lands on a woman and both our protagonist and his love interest watch the delicate wings flag subtly before taking off. There is meaning behind every shot and for once sex scenes are not written for the sake of eye-candy but instead provide explanatory characteristics to the personalities of this tragic tale of love and loneliness.

I was reminded of the crime films once made by French and Italian directors of the 60’s and 70’s. Like the butterfly featured in this film, such well crafted films are a rarity and near extinct. Another film “The American” reminded me of was the excellent and slightly superior “In Bruges”. Similarly, “In Bruges” was also about a hitman stuck in a foreign land. Although, one is humorous and the other is gloomy in tone, both films are clever little masterpieces with philosophical undertones.

The performances are impressive, particularly Violante Placido as Clara and George Clooney in another moving lead role. One of the most remarkable feats the film pulls off is relying on the intensity of complete utter silence. Dialogue is only spoken when necessary and credit has to be given to Rowan Joffe’s low key writing and Corbijn’s tightly controlled directing. “The American” is truly a work of art.